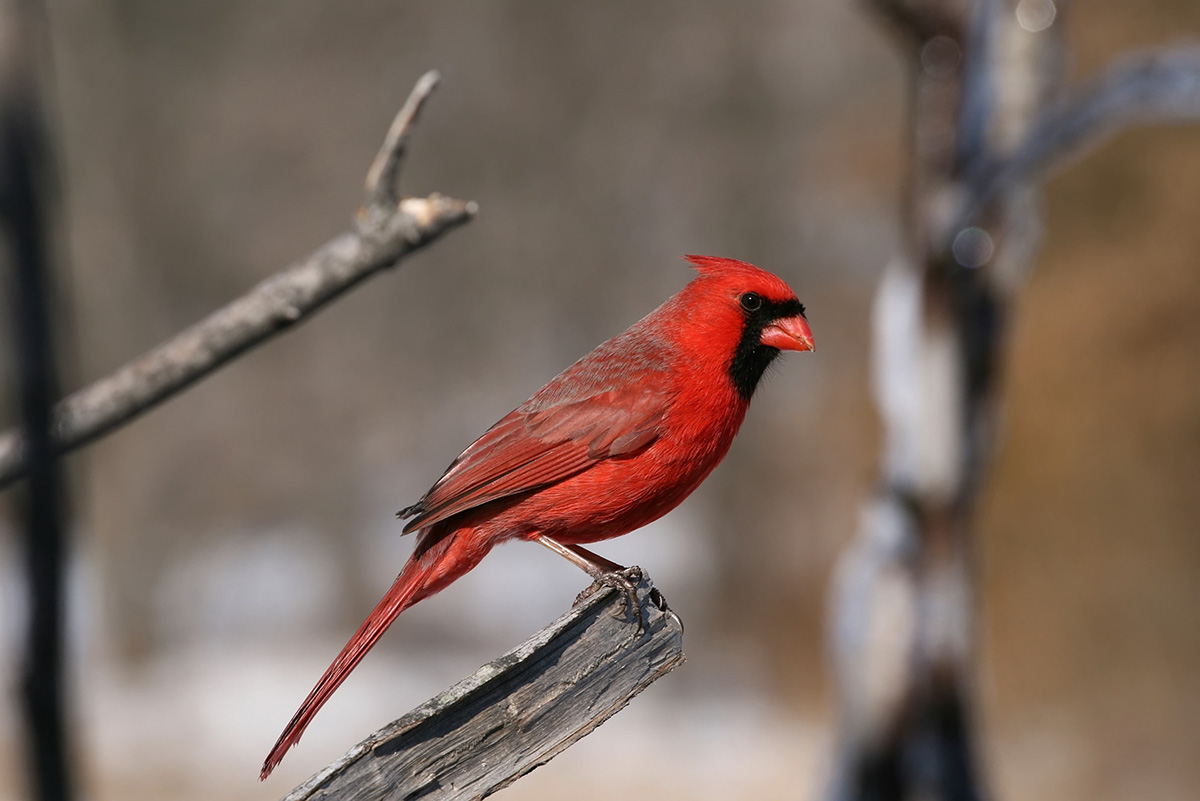 Description of the Cardinal

The Northern Cardinal is a popular backyard bird, particularly in Kentucky and six other states which claim it for their State Bird – now THAT is popularity! Cardinals are often called a “red bird” in areas where they are common- particularly in the southern United States. Over the past few decades, milder winters have allowed Cardinals to become more prevalent further north.

The male Cardinal is recognizable by its bright red color, black face and the crest on its head.   The female Cardinal’s plumage is muted brown with occasional red traces and a bright red beak. Cardinals were reportedly named by early American settlers who associated the bright red plumage of the male cardinal with the scarlet robes of Catholic Cardinals.

These bright birds are usually 8-9 inches long with a wingspan of nearly 12 inches and they weigh in at around two ounces. They were once trapped and sold overseas to be kept as pets, but that practice was outlawed in the US in 1918.

Longevity and Molting of the Cardinal

Cardinals usually live for just over a year on average due to high instances of death as a chick or a juvenile bird, although there have been recorded instances of banded wild Cardinals living for over 15 years. They molt only once per year — in the fall — making their bright plumage appear even brighter!

Family Life of the Cardinal

Both the male and the female of the species sing beautifully year-round, with a wide variety of sounds in their personal repertoire and mated couples often sing in duet.

Cardinal songs serve a variety of purposes: from establishing territory, threatening a rival,  attracting a mate, and to warn each other of danger. Cardinals usually mate for life and stay together throughout each season. They do not migrate and raise two or three broods of 3-4 eggs per year. Their eggs are white or slightly green tinged.

The female sits on the nest, but once the chicks are hatched, the male takes over care and the female, often, lays more eggs and begins incubating them.

Male Cardinals are extremely territorial and will readily fight other Cardinals.

What Do Cardinals Eat?

While nesting, the male will feed the female. They also court females with gifts of food. When Cardinals flock (which is usually only in the winter) the males dominate the food sources. The rest of the time, paired Cardinals will usually eat side-by-side at your feeder.

Most of their diet (90%) consists of seeds, grains, and fruits. Adults will eat insects on occasion and they feed their young a diet of primarily insects. They particularly like easily-shelled seeds, like sunflower seeds and safflower seed, and corn — but Black Oil Sunflower Seeds are their favorite among favorites!

On a related note, squirrels don’t usually like safflower seeds as much as other types of birdfeed, so if you want to attract Cardinals in particular, you may want to keep that in mind.

Birds are flying over the garden. What are you doing inside the house? Join them! If you can’t join them, at least open the window and greet them!