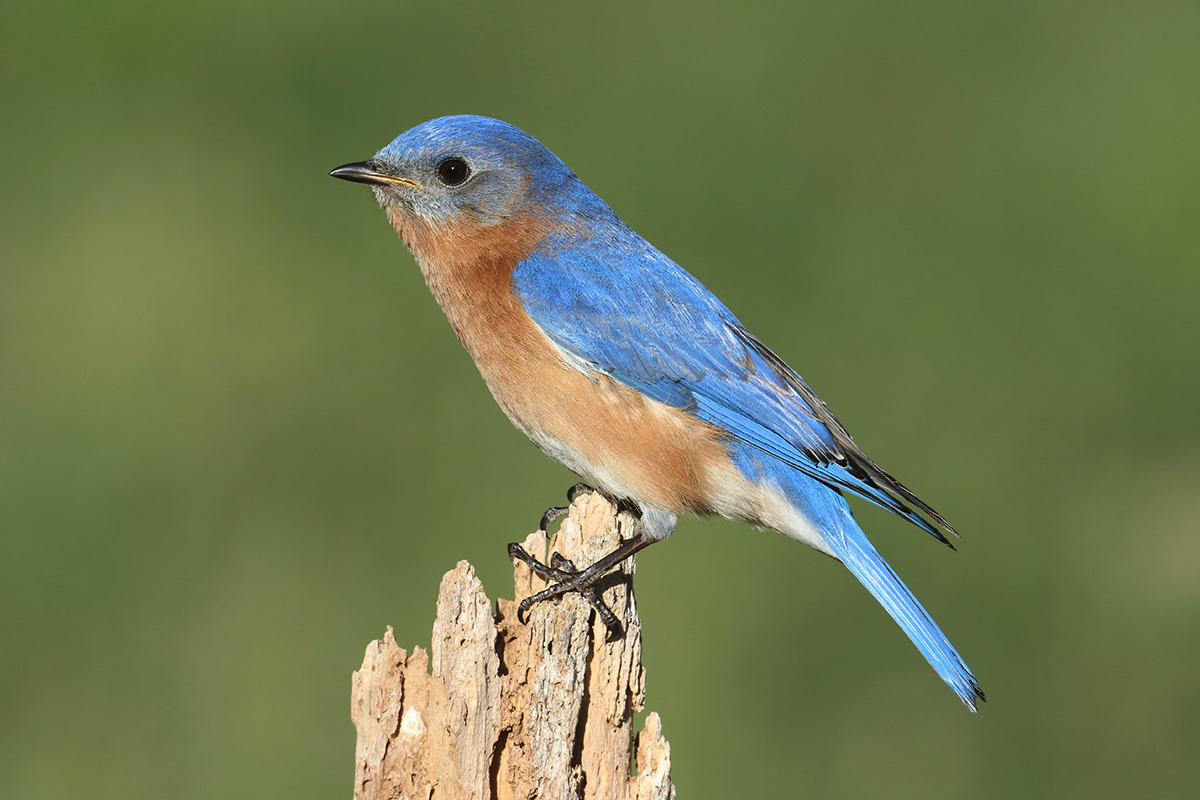 Description of the Eastern Bluebird

The Eastern Bluebird is small bird with a round head, plump body and a posture best described as alert. The male Eastern Bluebird, pictured above, is bright blue in color over the top of his body and rust colored over his breast.  When viewed from a distance the blue will be more subtle in color as much of the brightness relies on lighting.  The female Eastern Bluebird replaces the bright blues with grays on her head and back, only showing blue on her lower wings and tail.  The rust chest of the female is much more subdued than the male.

Longevity and Molting of the Eastern Bluebird

Eastern Bluebirds are born nearly naked, with the exception of dark grey down on their heads and down the center of their backs.  They acquire their feathers quite quickly; by day 13, you can easily determine the males from the females based on their plumage. Like most species their first plumage is not

Family Life of the Eastern Bluebird

The Eastern Bluebird male will select a nest site, often in a natural cavity, such as an old Woodpecker hole, or a nest box. The female will build the soft cup shaped nest and lay 4-5 pale blue or white eggs.  The incubation period is 13-16 days and the female will do most of the sitting. Upon hatching both parents will bring food to the young, on occasion their feeding efforts are supported by previously weaned young.  Young will stay in the nest for 18-19 days. Parents will raise 2 or 3 broods per year.

What Do Eastern Bluebirds Eat?

Eastern Bluebirds are generally classified as ground foragers, usually seeking out insects or caterpillars in the spring and summer and berries in the fall and winter. They have impeccable eyesight, allowing them to spot their prey from 60 feet in the air. They will occasionally catch insects while in flight. If you have an open yard, you may be able to attract a breeding pair with a nesting box. They are not generally seen at feeders unless you have a mealworm feeder.

In a world where thrushes sing and willow trees are golden in the spring, boredom should have been included among the seven deadly sins.